The bees are doing fine. I sit and stitch at odd moments, or occasionally work at them for an hour. Likewise the moths... it's almost mindless, meditative; a silent rhythm of thread the needle, stitch, stitch, snip, thread the needle. Each wing is two layers of  wedding dress net, one at right angles to the other and stitched along the lines.  At first I drew the lines with a very soft pencil, which was difficult to see clearly and made the thread dark grey. Then I traced the lines on to newspaper, pinned the net to it and machine stitched (remembering to put the 'paper needle' into the machine). 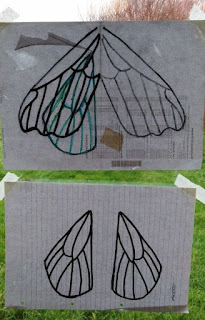 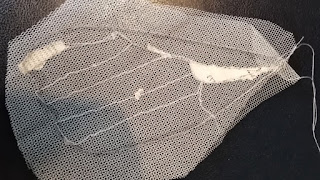 Back stitch by hand to make lines more visible; also because I love hand sewing. 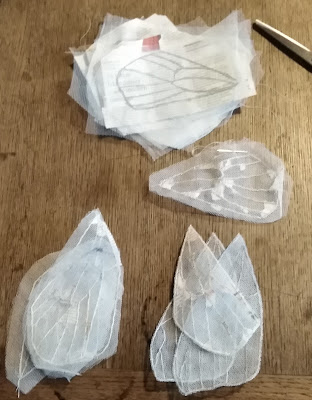 The newspaper is torn away - but it usually leaves little bits along the edges. Another happy accident that I decided to use, as it adds to the dead, ghostly look of the piece.

When finished, the edges are trimmed ... then I shred the wings into further dilapidation. 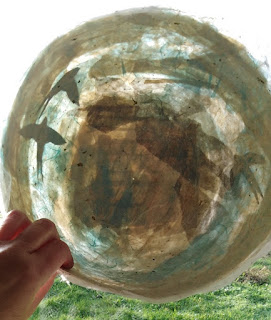 This is what I had ended up with after that oh-so careful unpeeling of layers and reconstruction, and it's a mess - not at all what I wanted.

But it could be that there has been a breakthrough. I've been seriously struggling with finding a way of  expressing "the absence of swallows". Although I'd stopped working on it, the idea remained somewhere at the very back of the brain's dark cupboard under the stairs. The other day I found myself thinking "What if I worded it differently?"...  the words 'memory of swallows' came to mind and shifted the feeling of being stuck. So I very quickly made a couple of bowl shapes to experiment with. The idea of using maps - as symbolic of their migrations -  keeps coming back to me and I've recently been given a big bagful of old maps. Synchronicity? 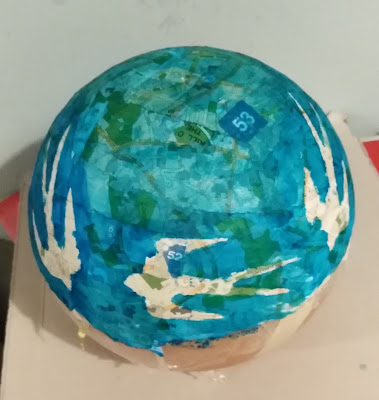 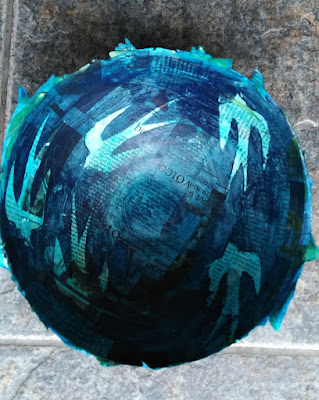 ...and inside, ink with acrylic paint. 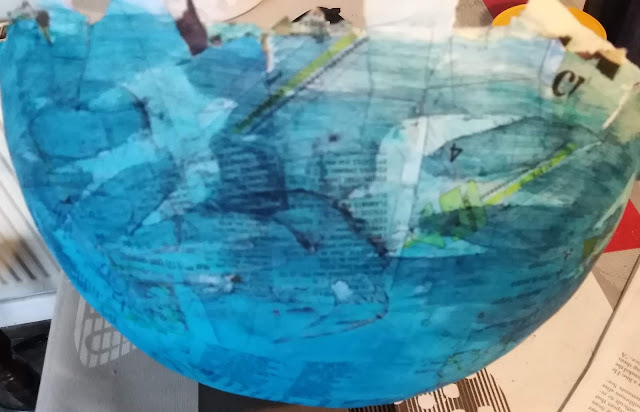 Although these are quite crude, it feels like there is potential. I'm liking the mistiness of the swallows on the second bowl and I'll need to work on getting the right balance of colour density difference between the layers - some of the birds were barely visible. And I do like the map motif. 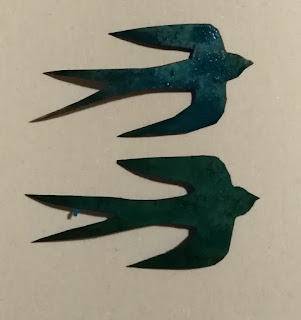 These were the birds used for masking out ... and although of course I have known for decades that successive drawing and cutting out of a shape alters it each time, this was a rediscovery (because I've not done it for some time??) ... one to use again as it removes unwanted uniformity.

Those little card birds led on to trying out another idea that has been hovering for some time.... 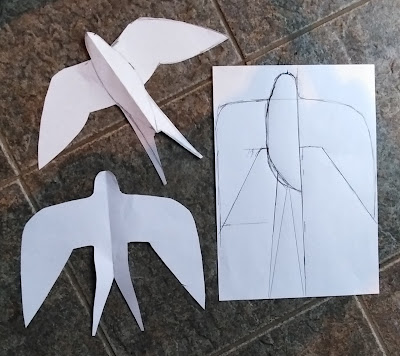 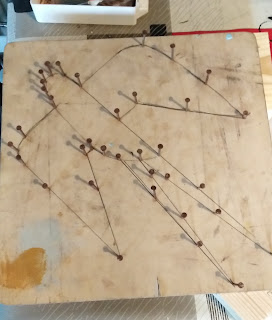 Transfer to wood, knock in nails ... bend fencing wire around  ... realise I should have used nails with smaller heads... 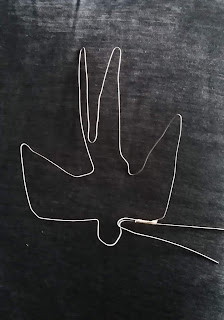 ... and end up with a twisted, clumsy wire shape.

Not everything has to work.