Even though I'm aware of it happening - that moment when some connections are made in the synaptic circuitry of the brain and an idea is born - what causes it, or allows it to happen is a mystery to me. The previous post ended with one development that had potential, and one result that was not what I'd hoped for. ...And then... there was this idea and I was in a fever to try it out - and where on earth had it come from? So - the words for this part of the work had moved from "Absence of Swallows" to "Memory of Swallows" - then the word "evidence" arrived, which prompted a train of thought about historical evidence / archeological finds, which led to pottery shards. Maybe not an immediately obvious series of connections but it does make retrospective sense to me. In her book "The Creative Habit", Twyla Tharp writes about the 'spine' of a piece of creative work. It's the "first strong idea... the toehold that gets you started. ...the statement you make to yourself outlining your intentions for the work...The audience may infer it or not."

The spine for this project was this image : 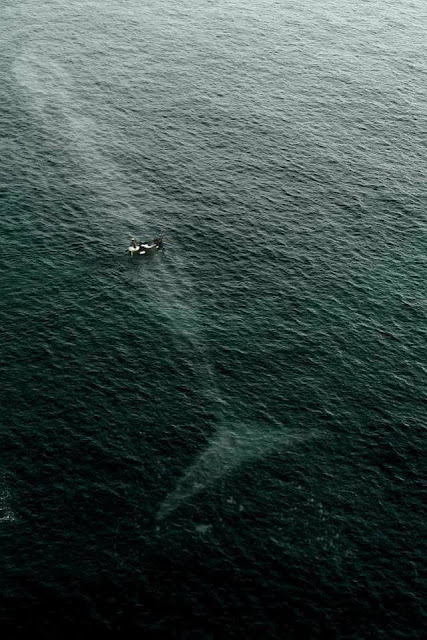 I find it profoundly moving; not only do I find it beautiful as a recorded moment, but grief fills me that a species as relatively small as an individual human is able and willing to destroy the largest creature on earth. The original wish was to make a life-size ghost of a whale - all 80 feet of it -  from some insubstantial material like muslin and suspend it from the ceiling of a large and public building - to get across the scale of it - just how awesomely big it is....and to honour all the whales we are killing by polluting the oceans. Although I am unable to see how it would be possible for me to construct such a whale or to find a suitable venue, nonetheless this image and the feelings it arouses are at the core of this work.

From there the idea grew to making the 'ghosts' of things ... and presenting some of them to look like museum exhibits of things long gone.... a sort of playing with time and an expression of future grief for the loss of species.

Which brings me back to the swallows and pottery shards as evidence ... 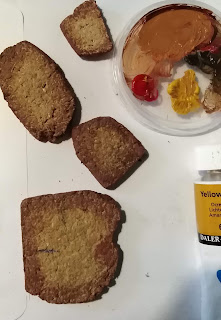 Although these look like bits of toast they are pieces of dried paper pulp with sawdust and glue added. I've cut some edges with a hacksaw, then sanded, painted and sanded again.

Below is a map on which a was painted a wash of turquoise ink. Paper stencils were used with a layer of ink, water and acrylic paint. 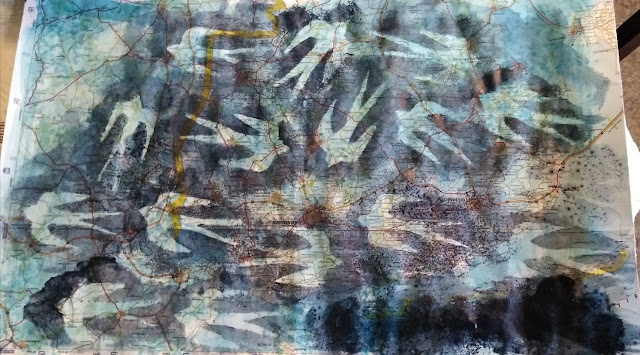 Later, I added lines with black crayon and printed small areas of pink on the heads, white on the bellies. 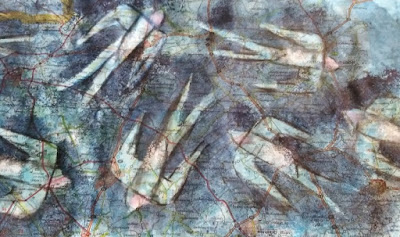 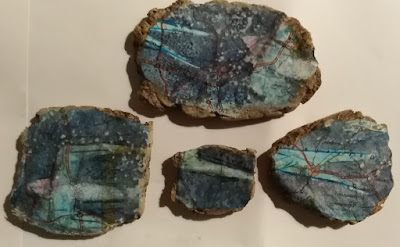 What I'm aiming for is to create the look of fragments of broken pottery ...evidence that swallows once existed. I may try this with white pulp and cleaner edges. The next step is to mount these in wooden cases that look like an exhibit from a 19th century museum, with maybe a small, handwritten label.

After I'd made these fragments I realised that on my kitchen table, for some months, there has been a piece of pottery found on the nearby shore... 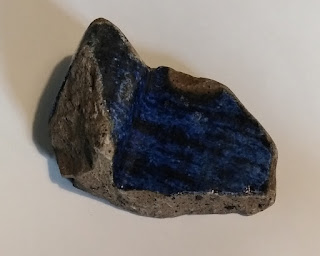 Posted by krystyna at 15:18 Email ThisBlogThis!Share to TwitterShare to FacebookShare to Pinterest